Mayor Goodman, The Iron Yard co-founder Eric Dodds, and the Las Vegas community marked the opening of the The Iron Yard in Las Vegas on August 19, 2015. The Iron Yard provides immersive code education for adults and kids, mentorship and capital for startups, co-working spaces and the value-generating relationships that will help them succeed personally and professionally.
“I think the event went amazingly well,” said Tisha Looker, Campus Director of The Iron Yard Las Vegas. “I was very humbled that we had such a huge turn out. I tried to count and I guess somewhere around 150 people were present. We had the Mayor say a few words and really set the evening up to be fun. We had some amazing food from Just a Bite Cheesecake and some great drinks.”
Mayor Carolyn Goodman took part in the ceremony at the facility on South Casino Center and Charleston boulevards. 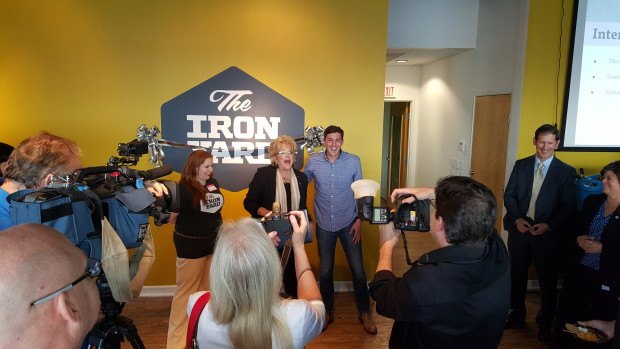 “Meeting and chatting with Mayor Goodman was awesome,” said Looker. “Having my son and I get a picture with her was just too cool. Also one of the little girls she spoke with thanked me for the opportunity to meet the Mayor which was just sweet. I also got to speak to some perspective students and their enthusiasm for what we do always humbles me. We make a huge difference in people’s lives and it’s really awesome to be a part of that.”
City officials say the training center could help fill a need for local entry-level code developers.
The Iron Yard was founded in 2012 and is headquartered in Greenville, South Carolina. The new Las Vegas Arts District campus is one of 20 in cities including London, Atlanta, Houston, Salt Lake City and Washington, D.C.
Looker says those in the community who are interested in a new career should apply to The Iron Yard.
“If you work in the industry even in a support role like Project Management or IT please reach out. We’d love to have you come in and chat with our students and share what you do,” Looker added.
For more on the opening, visit VegasStartups.com.
Subscribe
Login
0 Comments
Inline Feedbacks
View all comments

[…] in 2012 and is headquartered in Greenville, South Carolina. The new Las Vegas Arts District campus, which opened in August 2015, is one of over 20 in cities including London, Atlanta, Houston, Salt Lake City and Washington, […]