Starting a new career? Las Vegas is one of your best bets

On April 24, 2014, Stephanie Grimes from the Las Vegas Review Journal Recent wrote an article called “Starting a new career? Las Vegas is one of your best bets.”
“College graduates in the market for a job might want to take a look at a recent survey that listed Las Vegas among the top places in the country to start a new career,” she wrote. “Las Vegas made the list because new transplants can take advantage of what the city went through when the housing bubble burst: Average rent for a one-bedroom apartment is $897, low for a major metropolitan area. Apartments.com also noted Las Vegas’ strong tourism industry and the amount of major conventions and meetings held in the city as a draw for new grads.” 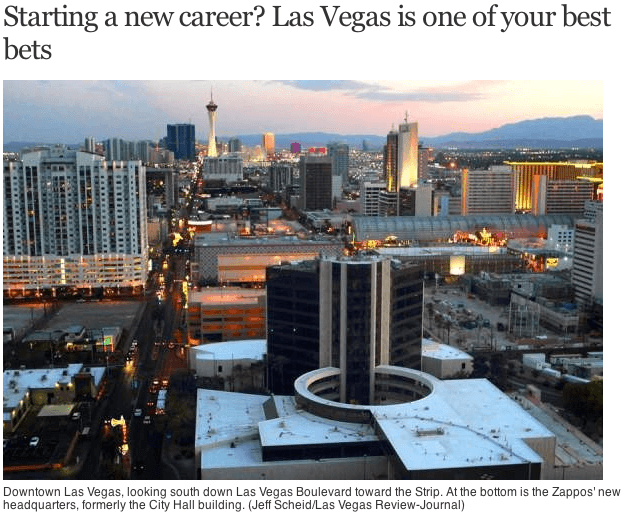 When looking at the top places to start a new career, the Apartments.com survey took into account affordability, career opportunity and demographics to find the 10 best bets in the U.S. for new and recent graduates.
These were cities where the average one-bedroom rent fell within 25 percent of the gross median income were favored, as were cities where unemployment was 7 percent or lower.
“Of course, the list assumes some level of flexibility in a job search, when the reality is many new grads are being less picky and just going where the jobs are,” she writes.
Interested in seeing what other cities made the list? Here are the top places in the country to start a new career:
1. Denver
2. Charlotte, N.C.
3. Phoenix
4. Austin, Texas
5. Columbus, Ohio
6. Cincinnati
7. Fort Worth, Texas
8. Indianapolis
9. Las Vegas
10. Dallas