The Innevation Center is a one-of-a-kind public/private conference, collaboration & coworking environment created by Switch. The mission is to boost and diversify Nevada’s economy. Below is top news that happened for The Innevation Center during the week of September 22, 2014.
#1 – Welcome Back, LaunchUp Las Vegas
“Exciting news, #VegasTech friends,” writes The Innevation Center team on their blog. “Launchup Las Vegas is back! After a yearlong hiatus, LaunchUp LV will begin again with its kickoff event at Inspire Theater on October 9. LaunchUp is a nonprofit organization that started in Utah and expanded to Las Vegas. Events are free and open to all interested in entrepreneurship and Jacqueline Jensen, Growth Hacker atOriginate, has signed on to run the events (among the many other awesome roles she plays!).”
RSVP for the October 9, 2014 event, which features hors d’oeuvres, speakers, and presentations from 4 local companies. More information here.
#2 – Tech Cocktail Celebrate Conference
Tech Cocktail is hosting their Tech Cocktail Celebrate Conference in Downtown Las Vegas on October 6 and 7, 2014. 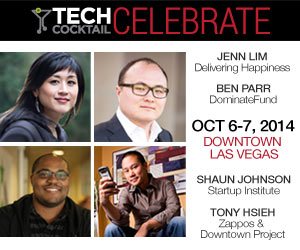 “The event will offer two days of programming centered around nurturing startup communities and building a startup company. The Conference will also feature a Startup Showcase & Mixer on a grand level, as teams from all over the nation compete to be named the Nation’s Hottest Showcasing Startup,” wrote The Innevation Center team on their blog.
If you’d like to attend the conference at a 50% discounted rate, The Innevation Center team has a promotion link here.