Meet CheckiO: The Game For Coders

VegasTechFund-backed CheckiO is the game for coders. Their team is building a technology that allows players to build games, publish them and compete at the best algorithms to play those games. And they are making it fun. 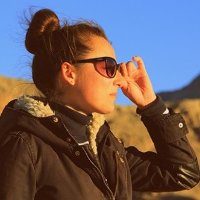 “We make coding practice fun through a game that has already attracted over 60k Python coders. We really want to show that coding is an entertainment and learning how to code better is done best through a fun game within a supportive community,” said founder Liza Avramenko. “Whether you are working on the next human genome or the most optimized algorithm to improve global logistics, add your challenge to CheckiO and let’s crack the code together. Or come and play with others solving fun real life coding missions.”
CheckiO was conceived and born in Ukraine.  When the team decided to grow and become the leading coding game, they saw almost no opportunities there.
“When we thought we had explored all the opportunities, we received an email from Boston Techstars and after a series of interviews we got accepted,” explained Liza Avramenko. “The experience of being part of the program was amazing and we still have a big extended family in Boston.”
After Techstars, Liza Avramenko and her team were researching different places in US to call CheckiO’s home.
“I thought that Las Vegas with its growing tech and startup scene could be a perfect fit for us,” Liza Avramenko said. “Great location close to the Silicon Valley as well as a crosspoint for many interesting people traveling through Vegas, great business conditions for a young company, great weather but most importantly amazing people who I met here during my initial visit.”
Liza Avramenko says she likes being in downtown Las Vegas, both living in the community and having her offices at Work In Progress.
“I like that here at Work In Progress we are immersed in tech,” she said. “Almost every day we have different events or meetups, not very big though. For example recently after a work day there was an AWS presentation where I chatted with the company, potentially building business relationships. There are design meetups, speakers and other events all around downtown. And I love it.” 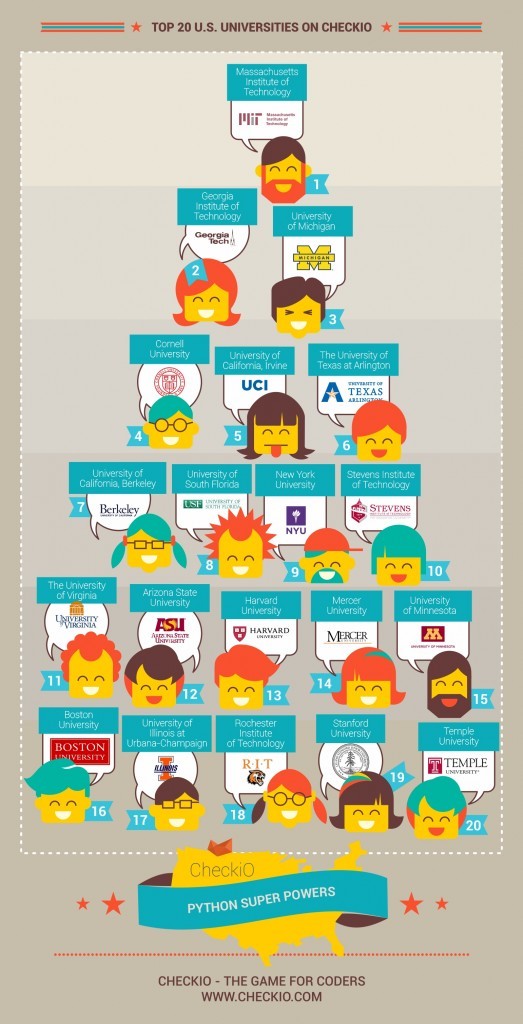 CheckiO’s most recent research looks at trends in Python, the most frequently taught programming language in introductory computer science classes.
“Since it’s not a simple game but the game where users compete at whose AI is smarter, we have pulled out data on .edu registered users and calculated their cumulative progress per university,” said Liza Avramenko.
“As students seek avenues to grow their Python coding skills and become expert coders, the CheckiO community has seen continuous expansion with thousands of new players signing up every month,” the team wrote in this blog post. “We have seen great adoption of CheckiO by the top universities in the United States as they look for new ways to supplement their traditional curriculum and engage their students.”
“The infographic shows the top 20 universities represented on CheckiO,” the team writes. “In CheckiO, players solve coding challenges to level up. Players can ask for help from the community, and can view others’ solutions once they have cracked the mission. Community support and self-learning through doing reinforces programming materials that students may have covered in class or online.”
Right now, CheckiO is the game for Python developers but the company is going to add other languages soon.
“We started off with Python because we knew it and when we moved to downtown Las Vegas we wanted to see if it’s popular here or not,”said Liza Avramenko. “There are Ruby, JS meetups with their communities but there is none for Python. That is why we started a Python meetup group. The first official meetup is planned for December 2, 2014.”
“Right now we are adding some cool AI games on CheckiO where users will be able to compete live at Scoregames by building i.e. Tetris AI,” she continued. “And with it we want to launch a code gaming nights here in Downtown later on. Since gaming has been a long term Las Vegas spirit we want to go with it but turn it into building a highly skilled tech community.”
Can CheckiO help the tech talent pool in the #VegasTech community grow?
“It’s very hard to compete with established tech cities with tech talent,”said Liza Avramenko. “I think for Vegas the challenge is to educate more tech talent rather than to relocate from other places. Those who have been living here are more prone to stay here rather than outsiders for whom Vegas still is a Strip.”
She says the CheckiO team is looking into different ways to partner with companies and educators in Las Vegas.
“CheckiO is used by some leading tech universities in the US like MIT, Georgia Tech, University of Washington and we would love to bring this success here,” she said. “I have spoken with some people in the Engineering Department at UNLV about how CheckiO could help in training more “ready to work” highly skilled engineers. If there is anybody else who could benefit from using the platform for training better engineers, for finding tech talent we are open to help community in all the possible ways.”