Scala Days, the premier Scala Conference, made its fifth annual debut on June 16th, 2014 at the Kosmos in Berlin.
The conference brought together developers from all corners of the world to share their experiences and new ideas around creating applications with Scala. Scala Days provided a unique opportunity for Scala users to interact with the key contributors to the language and related technologies and connect with fellow developers. The 2 day event was filled with discussion around academic research, Scala use cases and visionary projects.
Jason Arhart, Software Engineer at Originate and Las Vegas Ruby Users Group co-organizer, spoke at Scala Days this year.

“I’ve been programming in Scala for almost 5 years now. I like Scala because it’s a very expressive language that lets me write solutions close to the way I think about them, with very little translation,” he explained. “I also like that the Scala community places a lot of value on solving problems in the best way possible, so the libraries available to me as a Scala programmer tend to be of very high quality.”
Jason Arhart said speaking at Scala Days in Berlin was his first time speaking at a conference, so he was nervous, but not as nervous as he had expected.
“I’ve been speaking at local programming language user groups for several years so I felt pretty well prepared going into it, and having my Originate coworkers there supporting me helped a lot,” he said. “The conference was very well organized and I had everything I needed for my talk, and that helped a lot as well. I’m always the most nervous right before a presentation, then once I start talking I’m focused on what I want to communicate and if I’m still nervous I don’t notice it.” 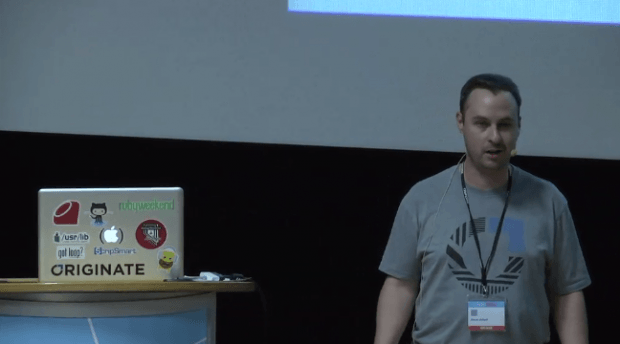