The STEM pipeline is in desperate need of attention. So when Casey Juilano of Nate Mack Elementary reached out to the Henderson Chamber of Commerce for support, the unexpected response opened up an opportunity for more than just funding a nice school project. 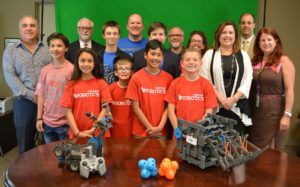 The Henderson Chamber Foundation raised $12,500 in one evening to support three local robotics teams wanting to attend the 2017 VEX Robotics Competition in Louisville, Kentucky. The goal for  the night of $11,000 was more than met with several donations including sizable amounts from Mayor-elect Debra March and Tronox.
Students from Nate Mack, Greenspun Jr. High and Basic Academy of International Studies all took advantage of the chance to travel across the country and participate in a robotics competition. The teams didn’t win, but the valuable experience opened the door for future support beginning in August.
Starting children down the STEM path is valuable for the future of Nevada industry. According to two UNLV College of Education instructors, only 15% of class time is spent on science instruction. Supporting local manufacturing is directly in line with the goals of the Henderson Development Association.
“These robotics teams are preparing students — as young as elementary school — for jobs that are currently changing the face of the manufacturing industry,” said Scott Muelrath, president and CEO of the Henderson Chamber of Commerce. “It absolutely behooves the Henderson Chamber to support our city’s future workforce by helping them go as far as they can.”