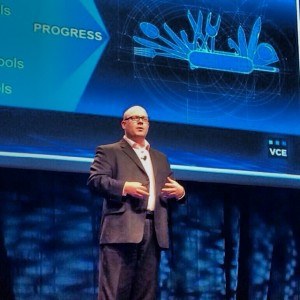 The Innevation Center is hosting their January 2015 CommunityCation event on Thursday, January 29, 2015 at 11:30 AM.
For this month’s event, VCE’s Jay Cuthrell will be speaking. Jay Cuthrell is a managing principal consultant within the Office of the Chief Technology Officer (OCTO) at VCE, an EMC Federation Company with investments from Cisco and VMware, and he is a frequent industry speaker.
Jay Cuthrell says his role within VCE is within the Office of the CTO.
“Today, VCE is an EMC Federation company with investments from Cisco and VMware,” he explained. “VCE was originally formed by EMC and Cisco with additional investments from both VMware and Intel. VCE’s charter is to accelerate the adoption of converged infrastructure and cloud-based computing models in data centers around the world.”
Each day, Jay Cuthrell says he is reading and consuming technology roadmaps from VCE’s investor companies and helping shape the strategic technology futures for VCE’s next generation products, services, and solutions.
“Best of all, I get to work with super smart people from around the world that have worked with all types, sizes, speeds, and qualities of data over many years,” he said.
In his previous role a strategic technology consultant with cuthrell.com, he worked with service providers, startup companies, and investment groups in addition to writing for ReadWrite and Telecompetitor. He has held CTO, VP, and GM roles at Digitel and NeoNova (formerly an Azure Capital and Bridgescale Partners portfolio company now a NRTC Company) and infrastructure consulting roles working domestically and internationally for Fortune 500 clients. He also served at Scient (formerly iXL now Publicis), Nortel, Analysts International, IBM, and NCSU College of Engineering. He holds a BS in Materials Science and Engineering from North Carolina State University and grew up in Beaufort, NC.
The January CommunityCation event will be centered around Big Data.
“The biggest challenge for startups is keeping a sense of perspective and critical thinking on the relative impacts of big data to business posture towards customer information in all forms,” Jay Cuthrell said. “Big data is considered by many to be a buzzword. So, if you ask a dozen people in the technology scene what big data means you’ll likely get at least as many varied responses. The key is to reach out to several disciplines (math, statistics, computer science, ethics, etc.) and arrive at your own conclusions about big data. Great starts might include attending a monthly Las Vegas R User meetup, Las Vegas Big Data meetup, and Las Vegas Big Data Developer meetup. Ask what other attendees are reading. Find out what other attendees are challenged with in their own journey.”
He says that while not everyone is a data scientist focused on creating a data lake, the challenges and connotations of big data are increasingly impacting both developers and the people that participate in growing pools of information.
“I think big data will permit the participating and mobile device connected portions of society to challenge assumptions for many processes we presently accept as being acceptable – i.e. the best we can do,” he said. “I am particularly fascinated by remote sensing, telemetry, and so-called real-time analytical information that can be used to automatically tune or enable conservation actions for precious shared resources such as clean water, power, and transportation. I’m also easily amused by the notion that someone somewhere will eventually determine the key indices for rates at which cat photos are shared from mobile devices on the Internet (if this has not already been established or published at the time of this article).”
The big data team at VCE recently put a few thoughts together and Jay Cuthrell things the #VegasTech startups might benefit from the content:
Advancing 3rd Platform Strategies on Modern Infrastructures in 2015
Value of Aggregating Big Data With Enterprise Workloads in 2015
“The articles provokes some of the conversation topics the startups in Las Vegas might appreciate and engage in for 2015 and beyond,” he said.
For those with an interest in big data, head to The Innevation Center to catch the January 2015 CommunityCation event. Get more details here.

[…] The Innevation Center team invite you to their January 2015 CommunityCation event. Get all the event details and hear from the featured speaker Jay Cuthrell here! […]

[…] The Innevation Center team invite you to their January 2015 CommunityCation event. Get all the event details and hear from the featured speaker Jay Cuthrell here! […]