Downtown Podcast is a weekly podcast that acts as an information platform open to the public, with a local, national, and international audience. Downtown Podcast is filmed weekly with a live studio audience by a group of local volunteers in an easily accessible, central downtown location.
This week, the Downtown Podcast celebrates their 100th episode. 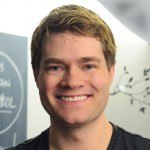 “Downtown Podcast started from a community need in downtown Las Vegas to learn about all the cool things happening,” said creator and host Dylan Jorgensen.  “Over time, it evolved to also be a Thursday night hangout, a place to learn about visitors, and then eventually a full fledged entertainment talk show. The Downtown Podcast is broadcast throughout Las Vegas online and on Cox channel 48 Wednesdays at 10:30pm.”
For the last 100 episodes, Dylan Jorgensen says Matt Mullenweg, developer of WordPress, was his favorite guest. 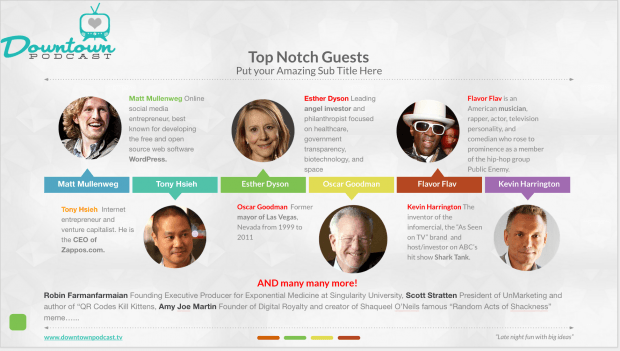 Started on October 25, 2012, Downtown Podcast has grown to highlight corporations, amazing speakers and the Las Vegas community each and every week.
“Many podcasts don’t make it to 100 episodes. What made it possible for Downtown Podcast to reach this milestone were people other than me,” Dylan Jorgensen said. “Things would have been dead many times over if it was not for people like Jacqueline Jensen, Evelyn Sabino, Jillian Minter, Susan Hinton, Pawel Szymczykowski, and many more that continually helped keep the momentum.” 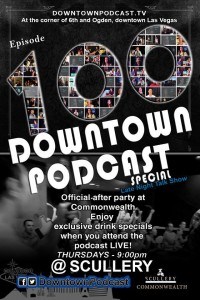 For the 100th episode, Downtown Podcast has a full band and a comedian. Expect to see Rockie Brown Band and Jeff Civillico from Jeff Civillico TV Entertainment at the episode.
“We will be filming at Scullery on Thursday, January 1, 2015 at 9:00pm with an afterparty to follow,” said Dylan Jorgensen. “The after party is at Commonwealth and only those with wrist bands from attending the podcast will receive these special drink offers.”
In 2015, the Downtown Podcast team will continue with their new tagline “Late night fun with big ideas.”
“We’re trying to use the talks how to build something that would appeal to both a TED audience and a late night talk show audience,” Dylan Jorgensen said.
For more information about the 100th episode taping, visit Downtown Podcast online here.