On Thursday, December 7th, UNLV’s Howard R. Hughes engineering students compete in the Freed & Harriet Cox Senior Design Competition.
The event is open to the public, so check it out. Doors are open from 8:00 AM through 12:30 PM, and then 2:00 PM until 5:00 PM.
This video was provided courtesy of UNLV to talk a little more about the event:

Engineering students from all areas of engineering participate, including mechanical, civil, environmental, and electrical engineers.
The challenge:
Plan, design, and create a practical, real-world solution to an engineering challenge. To win, the solution must be both innovative and commercially viable, which is no small feat.
Students will have their prototypes on display, offering demonstrations and interviews throughout the day as they compete for cash prizes, collaboration opportunities, and recognition. 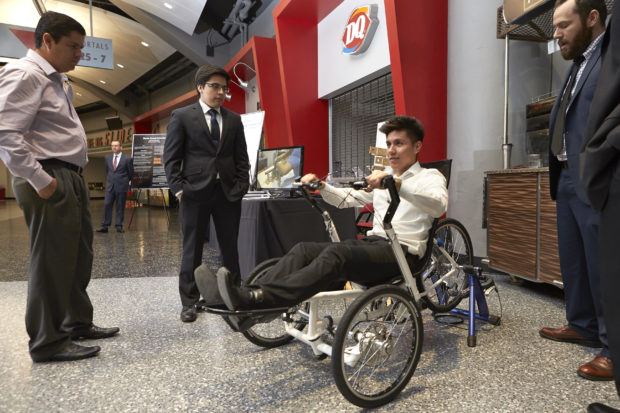 What’s On Display at the UNLV Engineering Showcase?

Senior engineering students will be showing off their skills with everything from campus redesign ideas to entertainment products.
Here are some highlights of this year’s entries:

Submitted by Sarah Africa, Josh Perry, and Luis Ruiz of the Department of Electrical and Computer Engineering, the Pedestrian Lighting Guidance System (PLGS) was created to address the problem of pedestrian fatalities at night.
In their own words:

The Pedestrian Lighting Guidance System is a more efficient way to solve pedestrian fatalities due to poor visibility at night. The system will be very user-friendly. Pedestrians would not have to do anything different than they usually do when crossing the street at night, because the pedestrian detection software will control the spotlight whenever someone triggers it. The system will run autonomously.

The PLGS aims to solve the problem of decreased visibility by automatically spotlighting pedestrians in risky areas so that motorists have time to react.
Current systems require pedestrians to activate a switch before crossing, but the PLGS increases visibility and lowers the risk of accident without requiring any kind of manual activation. 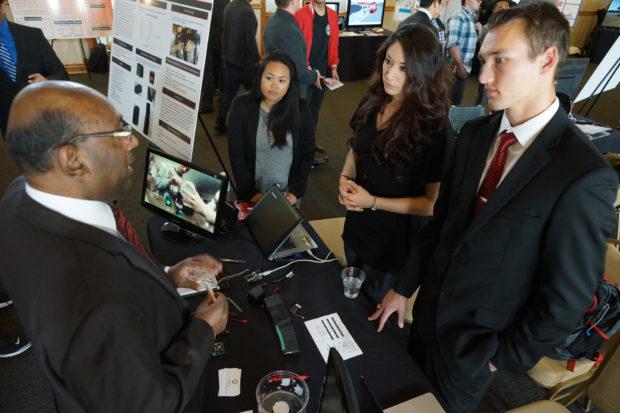 The Marco Polo App provides the ability for a user to share their location privately whenever they want by initiating contact within their list of friends, dubbed as “Sending a Marco.” When a request is received, the recipient may accept by “Responding with a Polo.” Once both users have engaged in the meetup request, their GPS locations will be shared with one another. Besides sending private meetup requests, a public mode is available to users in order to meet new people and share local event information; both modes are based upon the same functionality yet provide two different socially interactive user experiences.

By making it easier to meet up with friends (and make new ones) the Marco Polo app hopes to encourage more human-to-human interaction. 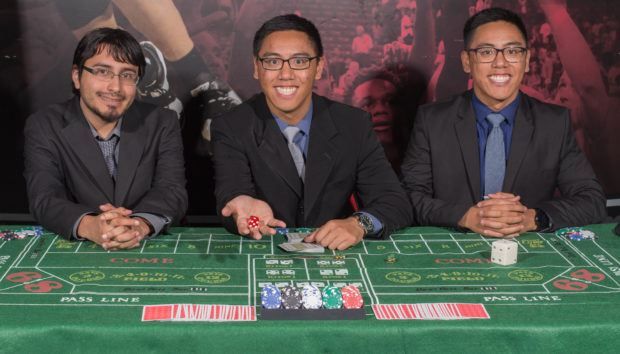 A team photo for the 2017 Senior Design competition

From the Department of Mechanical Engineering comes the I.E.D. Rake, created by Nicholas Previc, Jenny Wong and Chris Juneman.
Improvised explosive devices (I.E.D.s) have killed and wounded thousands of members of the armed forces, and this team has set out to come up with a better solution to detect and neutralize those threats.
Their project attempts to improve on current methods by making I.E.D. detection safer for troops.

The I.E.D. Rake may not cover as big of an area as some of these larger mine detectors, but it does not have direct human operations. A large mine detector vehicle needs a human operator to drive the vehicle so if the I.E.D. blows up under the vehicle, the driver has a chance of getting injured. The I.E.D. Rake is remotely controlled so the human operator is well out of the blast zone. There are other robots out there that do not involve a human driver, but those robots do not efficiently detect for I.E.D.’s as they do not have extension arms like the I.E.D. Rake.

The team also hopes the I.E.D. Rake can be a more cost effective solution than mine detectors currently employed by U.S. armed forces.

These are just a few examples of the prototypes on display at the UNLV Engineering Showcase.
More than 30 projects will be presented and demonstrated throughout the day, including a smart pallet for warehousing and shipping, an automated sorting hat, and a toaster that butters the freshly toasted bread for you.